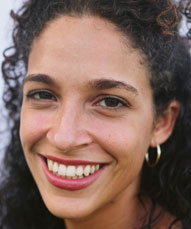 The temporomandibular joint (TMJ) connects the lower jaw, called the mandible, to the temporal bone at the side of the head. Because these joints are flexible, the jaw can move smoothly up and down and side to side, enabling us to talk, chew and yawn. Muscles attached to and surrounding the jaw joint control its position and movement.

When we open our mouths, condyles, or the rounded ends of the lower jaw, glide effortlessly along the joint socket of the temporal bone. A soft disc lies between the condyle and the temporal bone to ensure smooth motion. This disc absorbs shocks to the temporomandibular joint from chewing and other movements.

Temporomandibular (jaw) disorders, also called "TMD" or "TMJ syndrome," are a general class of health problems associated with the jaw. TMD may occur when the jaw twists during opening, closing, or side-motion movements. These movements affect the jaw joint and the muscles that control chewing.

TMD is not just one disorder, but a group of conditions, often painful, that affect the jaw joint (temporomandibular joint, or TMJ) and the muscles that control chewing. Although researchers don't yet know how many people actually have TMD, the disorders appear to affect about twice as many women as men, according to the National Institute of Dental and Craniofacial Research.

Fortunately for most people, jaw joint or jaw muscle pain is usually not a sign of a more serious problem. Pain and discomfort from TMD is temporary and sporadic, and can come in waves or "cycles."

Only a small percentage of people with TMD pain develop significant, long-term symptoms, according to National Institute of Dental and Craniofacial Research.

Temporomandibular disorders fall into three main categories: Severe injury to the jaw or TMJ can cause the problem. Arthritis in the jaw joint may also follow an injury. Orthodontic treatment, such as braces and the use of headgear, has also been blamed for some forms of TMD, but studies now show that this is unlikely, according to National Institute of Dental and Craniofacial Research.

According to the American Academy of Pediatric Dentistry, the diagnosis and treatment of temporomandibular disorders in children and young adults have received increased attention in the past few years. There is controversy regarding the significance of signs and symptoms of temporomandibular disorders in children, the value of certain diagnostic procedures, and what constitutes appropriate therapy.
PEDIATRIC DENTISTRY
EARLY ORTHODONTIC TREATMENT
CHILD'S FIRST VISIT
INVISALIGN FOR TEENS